We were called to a London property to investigate whether it was suffering from damp issues following an outbreak of fungal growth in the downstairs bedroom.

Our evaluation of the property was based on a visual inspection and where possible, using a non-invasive and in-depth moisture survey to determine possible locations of the high moisture levels, and to conduct a fungal mould remediation if deemed necessary.

Upon arrival, we took readings of the atmospheric conditions within the property. These readings help us to evaluate several things, including whether there is a risk of secondary damage to hygroscopic materials (eg. wood and plasterboard) due to high levels of moisture in the air. Hygroscopic materials can absorb water vapour from the air, increasing the amount of water they’re holding at a given time. As such, this can lead to further issues, including microbial (most commonly mould) growth.

The readings at our visit read as follows:

We started our inspection by checking the pressure gauge on the boiler, which is located in the kitchen. We noted that the pressure gauge was at 0 at the time of our visit. The client also informed us that his tenants reported a lack of hot water at the property approximately three months ago and were advised to top up the boiler with water.

Due to the lack of hot water and the pressure gauge reading zero, we suspected that there might be a slow leak from the central heating system. Because of this, we inspected all radiators and found a possible leak from one of the radiator pipes in the hallway.

Our moisture survey was completed using a Protimiter MMS2 which provided us with both WME and REL readings. We recorded very high moisture readings on the lower walls in the bathroom, hallway, and master bedroom.

Although we found a small leak on the hallway radiator pipe, it was unclear if the high moisture levels and the outbreak of fungal growth were solely due to this leak. Therefore, we recommended a full leak detection survey to ensure that there were not any other leaks in the property.

We also noticed that the flooring has been laid on top of thermal plastic tiles which could have possibly contained asbestos. As such, we took samples of the tile and bitumen adhesive which were sent for laboratory testing.

Based on the findings of our evaluation, we concluded that the ongoing leak resulted in the fungal growth on the ground floor of this London property, and that a professional mould cleaning service would be required. 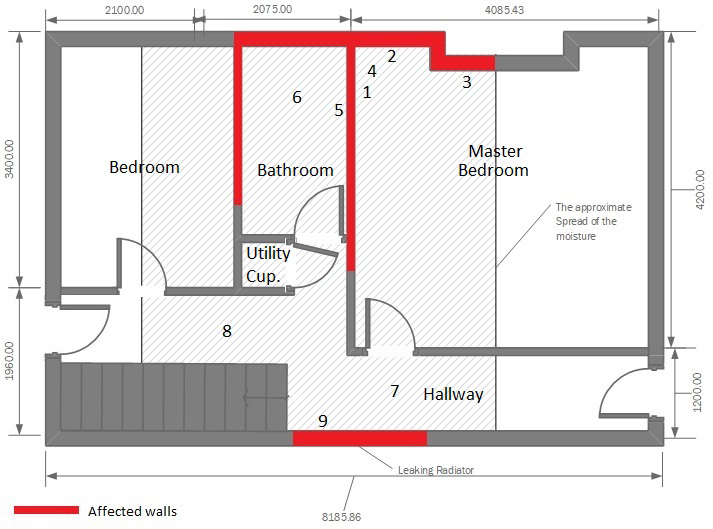 Once the leak was rectified by third parties, we could return to site to begin the drying the process. However, due to the strip out work required to facilitate the drying, the tenants had to vacate the property.

We recommended the following enabling work to remove excess moisture from the affected areas:

Our work on the mould removal in London took two technicians two days to complete while the drying process lasted for four weeks using a combination of adsorption and condensing dehumidifiers. The dehumidifiers work alongside air movers which promote evaporation.

Get Your FREE mould removal estimate in 3 easy steps.