We were called to a semi-detached property in Folkestone, Kent, that was built circa 18th century and was suffering from extensive fungal growth, needing a professional mould removal. The three-storey property has been turned into flats, and it was the basement flat that we were called to look at.

Following investigations from another company, fungal growth was found to be growing under the floorboards in the lounge area. We attended site to assess the damage to the structure of the building caused by the fungi, investigate the cause, and to provide mould removal in Kent.

When we arrived on site, we were shown the damaged timber floorboards along with the wooden joists and base plate along the external wall. The damage was very extensive and all the affected woodwork needed complete removal. The property in question was in keeping with the neighbouring buildings; period houses with three-storeys. However, the properties on the opposite side of the road did not have basement levels that were lower than the pavement and road, unlike the one we visited. Despite this, this style of building is still common within this part of Folkestone, Kent.

The basement flat has solid brick walls finished with plaster, and a suspended timber floor with a variety of floor coverings installed on top. When we visited site, we wanted to investigate the DPC (damp proof course) in between the joist’s supporting base plate and the brickwork beneath. However, due to the amount of fungal growth underneath the floor, this wasn’t possible. 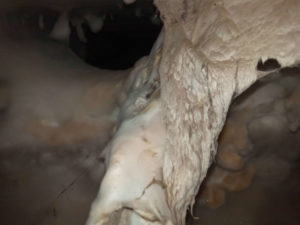 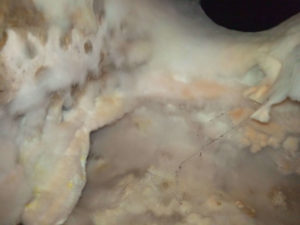 While on site, we took atmospheric readings both within the property and outside for comparison. They read as follows:

Upon inspection of the exterior of the property, we found a number of issues which are likely to have contributed to – or been solely responsible for – the fungal growth. These included:

Air Bricks
According to NHBC standards and building regulations, air bricks should be located at least 75mm above hard and soft landscaped areas to reduce the risk of being obstructed or flooded.

Air bricks may be located at or near ground level where measures have been taken to avoid flooding by sloping the ground away from the air brick and providing drainage where the ground is not free draining.

In this case, both air bricks located at the front of the property are exposed to flooding, and both of them have been obstructed preventing ventilation of the subfloor void. It is very likely that this may have contributed to the damp issue and fungal growth inside the property. 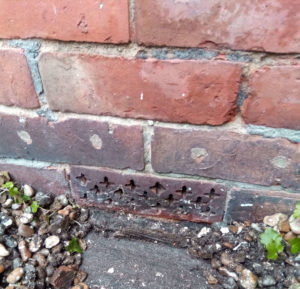 Liquid DPC
As visible in the photos above, the lower bricks of the property have had chemical DPC (damp proof course) injected at some point in the past. This indicates that there is/was an issue (possibly breach or bridging) with the original DPC, hence why a chemical DPC was injected into the masonry.

Leaking Gutter
We identified biological growth on the masonry along the guttering and downpipe. This indicates that there may be a leak from the gutter above, which may also be contributing to the issues inside the property. During our inspection, we carried out a moisture survey which found that the moisture content of the timber floorboards was very high, especially around sample points 1 and 2. It gradually decreased as we moved towards sample point 4, indicating that the primary source of the moisture may be located on the left-hand side of the external wall. Upon completion of our inspection and moisture survey, we concluded that the building issues identified above caused the fungal growth in the lounge area of the basement flat in Folkestone.

Subsequently, we recommended the following works in addition to the fungal remediation:

The fungal growth was mechanically removed through specialist mould removal, and all affected timber was cut out and double bagged to prevent the spread of fungal spores. The remaining timber was then cleaned using H rated HEPA vacuum systems and washed.

As a final step, the lounge area was ULV fogged using Decon 7, an environmentally friendly decontaminate which can eliminate 99.99999% of bacteria, viruses, moulds, biofilms and biological hazards.