The 2007 summer floods in Hull wreaked havoc to as many as 103 schools, including Sydney Smith School, whose buildings were so badly damaged by the flood waters that everyone including central government was fearful that the restoration work couldn’t be completed before the pupils returned from holiday.

The school received national media attention and the then deputy Prime Minister, John Prescott, visited the school on several occasions to inspect the scale of the damage and keep an eye on the progress being made.

To much surprise and delight, all the “high priority” curriculum blocks were cleaned, dried and reinstated in time for the start of the new school term. In fact, Sydney Smith School was one of the only large schools to open in time. This result was only possible because Ideal Response was called in to assist with the project, utilising our rapid-drying technology to clean and dry the blocks up to seven times quicker than conventional drying methods.

Flood Damage Cleaning in a School – HullThe summer floods in July 2007 made Sydney Smith School in Kingston upon Hull completely uninhabitable. It was a large school with over 1600 pupils and 15 buildings spread over 40 acres of land. Each classroom block contained nine classrooms, bathrooms and common areas – all of which were badly damaged by the floods and needed drying and reinstatement. We went in to rapid-dry each block as soon as it was safe following the removal of asbestos. We rapid-dried the buildings’ structures and the concrete slabs that formed their foundations. Using the four best rapid-drying systems available and up to five technicians at a time, we were able to dry each block in only one week.

Water Damage CleaningWe began by rapid-drying those blocks identified as high priority because of their curriculum value. These included science labs, home technology, design and technology, art and IT blocks and the special education needs (SEN) building. We also dried the main assembly hall so it could be used as a diner where the pupils could eat. Once each block was dry, tradesmen came in and began the reinstatement works.

We also cleaned the external surfaces just over the tidal mark of every building within the school grounds. This cleaning was important to the health and safety of the pupils and staff, and ensured the safe removal of any possible contaminants. 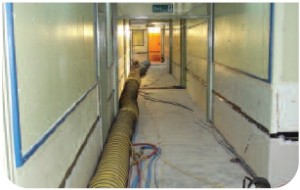 We utilised all four rapid-drying systems available in the UK to effectively dry all the blocks as fast as possible. These included Arid Air, DRYAIR, Water Out and TES. These rapid-drying systems typically dry buildings seven times faster than conventional drying methods.

From our knowledge, this was the first time in history that these systems had all worked together. It meant we could dry a large area quickly, and was only possible because Ideal Response is the only emergency cleaning contractor in the UK with all four systems.

The flood damage, and the size of the site itself, meant there was insufficient power onsite to run all the necessary equipment. However, we ensured all our equipment was self-sufficient by providing our own power generators and heavy lifting equipment.

Above all Ideal Response saved the builders and the Sydney Smith School a lot of precious time. By rapid-drying the buildings as fast as we did, the flood damage restoration process was minimal as builders were able to rebuild sooner, making a tangible difference to the pupils and school management who were able to enjoy some normality amidst an otherwise hectic situation.