A detached house in Stonegate, East Sussex, suffered from an electrical fire caused by an old freezer. As a result, there was soot and smoke contamination to the internal structure of the property, and our fire restoration services were required.

The fire happened approximately eight weeks before we attended site and prior to us attending, the property was cleared of all contents and was left ready for cleaning.

Our evaluation was based on a visual inspection of the internal areas that required cleaning only. The ceilings to the entrance hall, conservatory, kitchen and loft were all excluded from our inspection as per the client’s request.

The remaining rooms in the property required decontamination and cleaning, including the kitchen which suffered from severe fire damage. 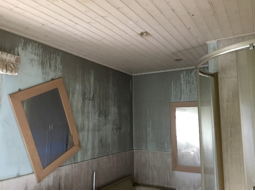 The fire had caused soot and smoke contamination throughout the entire property, which needed smoke damage cleaning. Soot includes fine black particles which are mostly comprised of carbon, and is the by-product of incomplete combustion; i.e.. the burning within a limited supply of oxygen. Due to its size and lightweight, soot can easily travel far from the original source of the fire.

The property, believed to be have been built during the 1900s, boasted plaster walls with lining paper and a sheen paint coating on top, and the ceilings were papered and painted. All carpets and underlay required removing, along with any curtains and blinds. When we arrived on site, the rooms had already been emptied of furniture and personal belongings.

The built-in cupboards had both shelves and drawers with veneer over chipboard and the bathroom had a tiled floor and splashback. Some of the grout needed replacing following the cleaning of the tiles, and we also had to look out for cracked glazing.

Ceramic tiles are susceptible to thermal shock; thermal shock occurs when a thermal gradient causes different parts of an object to expand by different amounts. For example, in the early stages of a fire, ceramic tiles or glass are heated gradually but if a flashover (the near simultaneous ignition of all combustible material in an enclosed area) occurs, the surfaces are heated rapidly, which can result in thermal shock.

While the bathroom suite could be cleaned, the taps needed replacing. Because soot and smoke are acidic, they corrode, pit, and rust any metal surfaces that they land on. The toilet area had been cleaned prior to our arrival for contractors to use, however, it still required a full deep clean.

The lounge which leads off the entrance hall had light smoke damage, while the entrance hall itself, the stairs and landing, three bedrooms, toilet, and bathroom were all heavily contaminated with soot and smoke.

The clean was designed to remove soot and smoke from all affected surfaces, ready for redecoration. The process would not, however, remove any discolouration due to internal contamination or natural features of the materials.

When we arrived on site, our first priority was to make the area safe and begin our cross-contamination prevention procedure. This was done in way of the erection of clean rooms and an initial saturation spray.

The saturation spray uses a coagulant and effectively increases the mass of airborne particulates. This increase in mass forces the particulates to the floor, allowing for their safe removal and preventing them from settling on previously unaffected surfaces or travelling to other areas of the property.

Once the cross-contamination procedure was complete, we installed HEPA air scrubbers in the property. This aims to remove any residual soot from the air. Affected surfaces in the above rooms were then washed down with the appropriate chemicals following chloride and pH testing to ensure that the right cleaning methods were employed. The ceilings, walls, skirtings, architraves, doors, windows, switches, sockets, built-in wardrobes, bathroom cupboards, radiators, and floor areas were all cleaned.

Finally, the surfaces were then washed down with potable water and the process was repeated as necessary before the fire damage cleanup Brighton was completed.